FROM FICTION TO ACTION 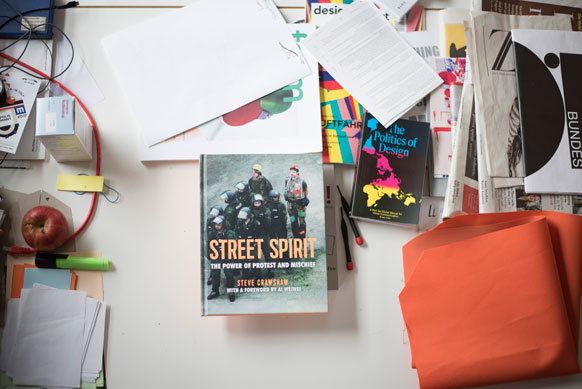 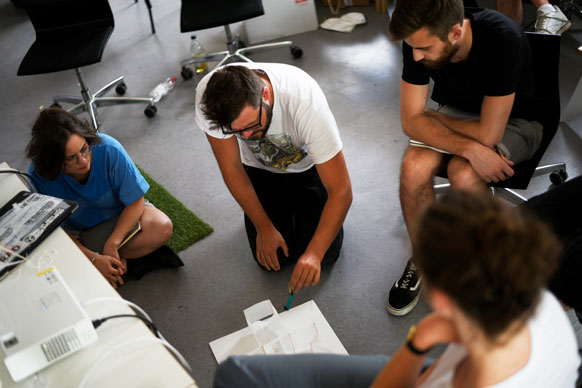 In the project “From Fiction to Action – Design in state of exception” the students are working on exactly this crux: through speculative design and methodologies of design fiction they develop comprehensible and mostly applicable scenarios and product prototypes. As an exemplical thematic complex serves the exploration of creative and designerly dimensions of revolution, civil disobedience, insurrection and resilience. In a present that is characterized by crisis perception, media hysteria, social injustice and an extreme imbalance of prosperity, designers are also forced to keep up. What do I deal with? Where does my energy and expertise flow into? What output and impact can I achieve for whom and to what extent?
Designers, artists and activists are already formulating their views in a variety of ways. An example of this is Artúr van Balen and his project on inflatable, soft scaled paving stones, which can be thrown between demonstrators and the police during demonstations and create humorous confusion. The foundations of the student projects are, among other things, researches on precisely such works of art and design, which were presented and discussed in texts and books in short seminars.
For example, the exhibition and the accompanying catalog “Disobedient Objects” of the Victoria and Albert Museum of 2015 already shows the aesthetic qualities of objects in resilient contexts: Self-protection signs in the look of books or shields equipped with large-scale photographs, DIY gas masks and aesthetic-functional appropriation strategies. The starting-point, to design exclusively tools for an irresistible revolution, with which then the new and better tomorrow can be defended against any opposition, has not proved to be consistently durable. Too romantic the barricade fight, too short-sighted the riot in the tear gas mist. Although more practical translations
of improvised tools, such as airy high bar constructions to block pathways, are pragmatic and appropriate solutions to the situation but design’s compelling competence is only partially fulfilled. It is about to think beyond the barricades, to create the foundations for new social alliances and to raise awareness of grievances outside the streets. It is about the comprehensible demonstration of functions of biopolitical and pastoral state concepts and the deconstruction of various plausibility tests for an exceptional state.
The “Laurin” camouflage coat by Jan-Arne Gruner offers a concrete formulated and functioning counter-position to the monitoring concepts currently being developed by the Fraunhofer Institute for the Südkreuz station in Berlin. The oversized design of the garment and the contradiction between analogue-human visibility and digital-machine invisibility actively question the conditions for total surveillance. Along with a narrative and speculative design methodology, historical and present strategies of civil rebellion were analyzed and extrapolated into certain futures. The different projects involve an individual and therefore very personal approach to the exceptional state, which is interpreted independently by the students. Forms of a future collective disobedience are worked out as well as criticism of conventional biological reproduction and mass surveillance. Project proposals deal with the question of embodiment of nationalism in consumer products as well as the spatially- formal representation of public security.Together the students developed new perspectives on what design can be and in which fields it may extend. Not into space as many people might put the design fiction term but onto hypothetical streets in very real environments 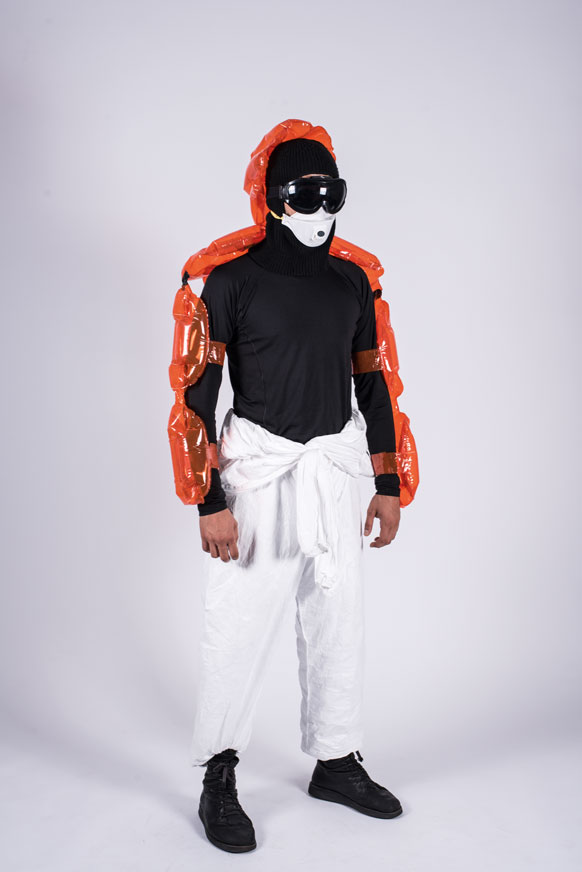 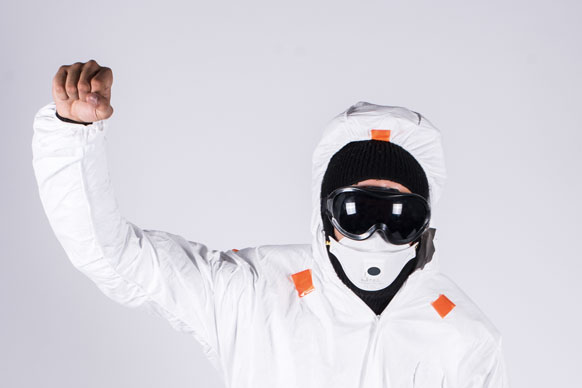 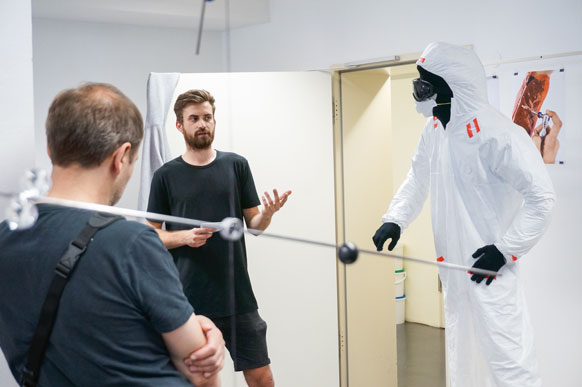 The standard and technology of equipment for police and security forces is increasing rapidly. People are using usual products to deal with direct repression on the streets and to protect themselves. In open workshops and makerspaces communities can use current technologies and tools to organize, prepare and improve their own equipment, too.
The basis of the Riot Suit is a robust Tyvek suit and other commercially available products and materials which are expediently modified and combined. The most important element is the inflatable protective unit, which is connected under the suit and activated in the exceptional situation by CO₂ cartridges. The demonstrator is now protected from impacts and seems much bigger and stronger. In addition to the resulting physical protection, it provides the user with a mental boost by inflating his body shape. 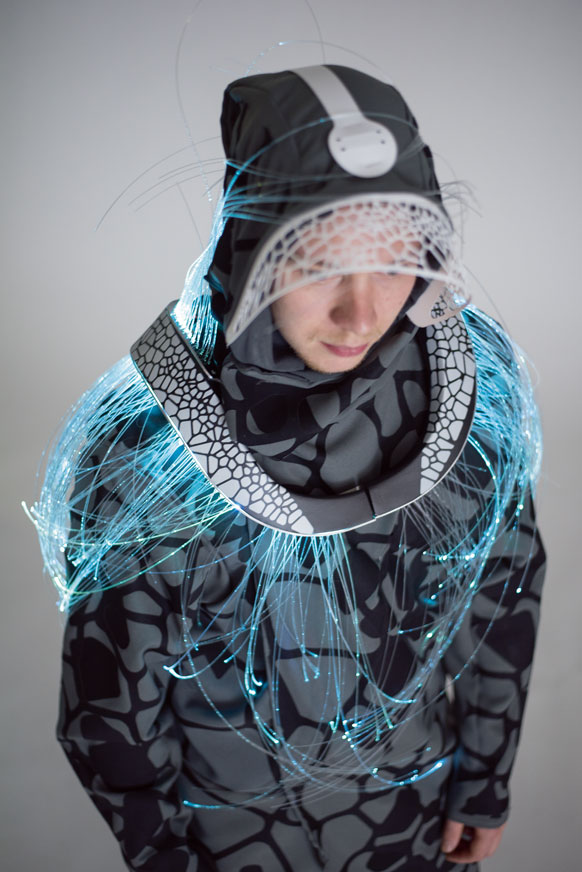 Laurin prevents this uncontrolled massive-scale data harvesting. Laurin is made of a coat and collar. The collar hosts a row of light sources illuminating plastic filaments. These glowing filaments help to constantly change a person’s visual characteristics to prevent optical systems from locking on to a person. The textile part also complicates recognition of a person’s silhouette as it has a distracting pattern and shifting layers of fabric. 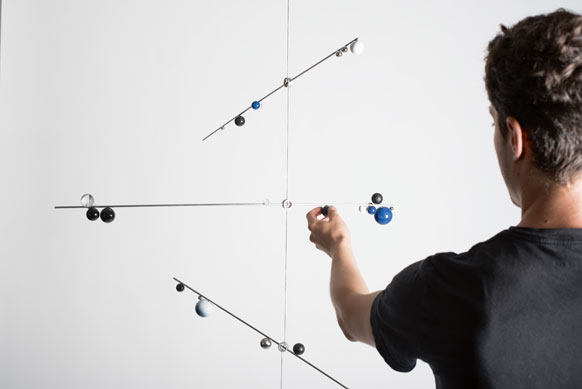 Alienation as a critical diagnosis of the present. Mind balance is an analog representation of the individual emotional cosmos in the form of a mobile. Personal values and characteristics are represented by freely positionable weights. The user can associate the three levels with a selection of objects. The individual objects placed on them are representing relevance, time, influence and attentiveness. In order to keep the mobile in a personal balance, the objects must be placed on the social, labor and time levels. The mobile thus enables a present physical perception of your own state of mind. 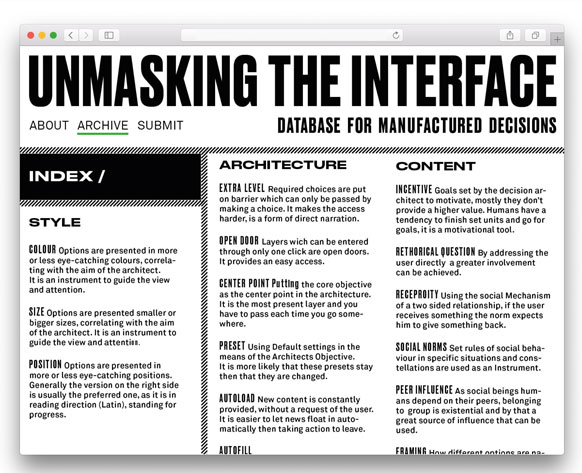 Unmasking the Interface is a participatory Database, collecting moments of subliminal guidance in Interfaces. Small manipulative tricks, based on psychological insights, are implemented to influence the user’s choice. The decisions might be as small as choosing this and not that flight, to watch yet another video or checking your mailbox once more. The interventions range from colour and positioning, to presumed consensus or the use of social norms. Singled out these moments don’t seem substantial. Added and put in the context of platforms, where we decide about social interaction or our jobs, and pay with time and attention, the influence gains momentum. The database reclaims agency from the user’s side using the feeling of playing against a hidden force. An Instrument for a forensic analysis of behavioural influences is provided, to open the archive for new entries. The collected juxtapositions expose the pattern of the invisible power structure. Unmasking the interface aims to contribute to the vocabulary and evidence needed to open a discussion – negotiating a code of conduct for the use of behavioural science as a tool. 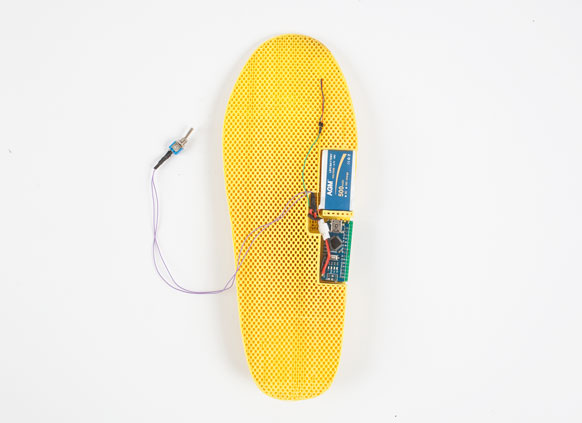 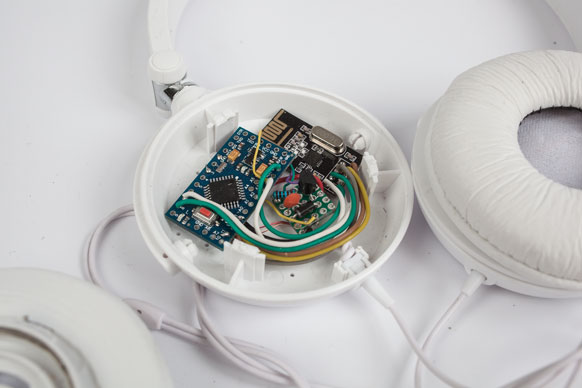 Hackers and Coders empowered themselves to offer resistance in a modern surveillance state. A revolutionary movement though needs the support of the population. „Inaudible Rebellion“ is a participation device for a resistance movement, originating from the hacker and maker community. It communicates physical presence with ultrasonic tones. If there are other participants in reach it receives tones and transforms them into light vibrations. This very limited communication with inaudible sounds is diffuse and bypasses the radar of surveillance. Inaudible Rebellion gives a sense for the movement’s spread and power and a telepresent physical support to its members. Self-confidence is the first step when starting an active nonviolent resistance. 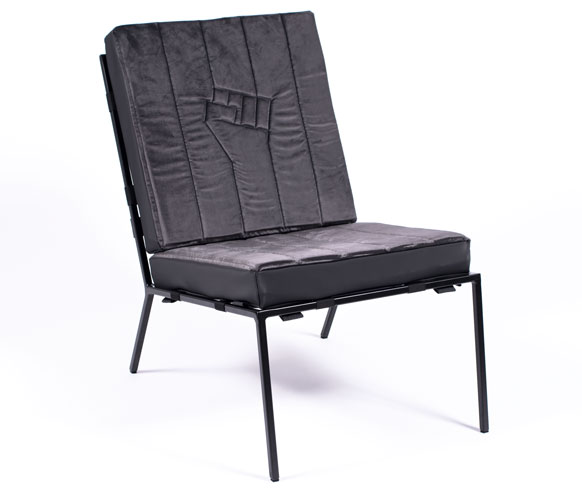 As instruments of civil resistance everyday items are often repurposed and used as “disobedient” objects. The beating of cooking pots in order to raise aware-
ness acoustically is a famous example which can be witnessed in several countries. Why should designers not try to design objects of everyday life as tools for political empowerment from the start? BENNO is not only a lounge chair but also a transfor-
mative piece of furniture which attempts to materialize resistance with a nonviolent, collaborative and effective approach. The removable seat and backrest cushions can be used as protective shields and seat pads for sit-ins, e.g. during street protests.

The foam layers have different degrees of hardness which provide the cushions with both a great seating comfort and protective qualities in case of physical violence. The core of each BENNO cushion is an EVA foam layer which absorbs punches and shocks particularly well. Furthermore the upholstery of several BENNO chairs can be interconnected. This helps protesters to unite forces by enabling them to build human barricades or other formations. Ultimately – in a state of exception – the chair’s naked and unusable steel frame remains as a relic of a lost “normality”.