Since 2009 we regularly give workshops on hardware hacking and physical computing with Arduino. These little workshop weeks are always amazingly productive and the students come up with quite elaborated results. Usually we start the programm with a little introduction on physical computing and electronic basics. Right after that we jump straight into cracking up old electronic devices to show the students what treasures can be found between two injection moulded plastic pieces. Beside defining these little bits and integrating them into the playful learning of electronic principles we also focus the students to observe the pieces that allow funtions, such as potis, displays, buttons, sensors, motors, gears etc. These hybrid materials will be then transformed into new objects and artefacts. With new functions, new looks and new interaction techniques.

For the last course at the University of applied sciences in Dresden we choose to concentrate on the abilities of Arduino Boards to create re/acting systems. All projects that are shown in the video above had to react on surrounding influences by a physical or virtual movement. 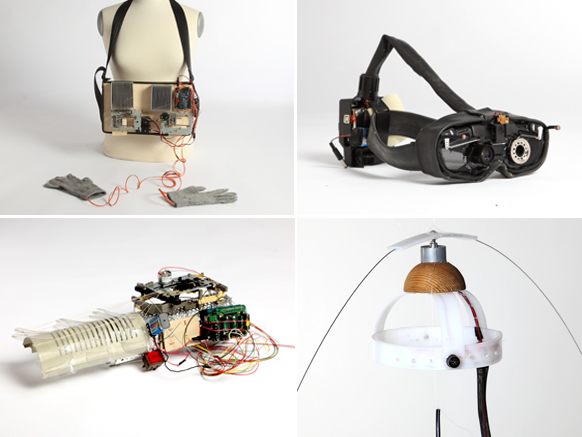 In this workshop we let the participants develop new products out of existing ones. Teached to use sensor and actuator technology the single groups were forced to crack up alarm clocks, radios, electronic toothbrushes and cameras to get to new interactions between augmented objects and humans. Like in all workshops of this kind the first part was focused on understanding electronic principles and get to know all the little colourful components that are densely packed in all these gadgets. After that tight schedule, the students go their way and we are more aaccompanying their progress. 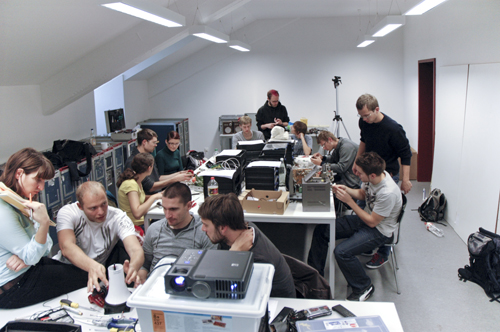 HACKING IS NOT A CRIME

End of 2009 we gave a workshop on Fritzing and Arduino at the college for applied sciences in Dresden. Together with the incredibly skilled Daniel Schulze (what a pleasure to do this workshop with him) we had three days to explore the foundations of physical computing using arduino microprocessor boards and fritzing software. The first day we cleared the basics of programming tangible interactions, electricity and tried out first little programs. Day two was more about details of coding and the way of controlling bigger circuits. For displaying the arduino set up’s and explaining electronic circuits and signages we used Fritzing, which the students started to use intuitively. The last day we needed to explain the communication between Processing and Arduino. Part of the workshop was to develop an interactive object using allready existing electronic material and parts of the provided sensors from the college. The results have been amazing, ranging from an afraid birdy to a raw gestural interface constructed from a radio toy and a household glove. Nice. The objects were presented while our ‘open office soiree’ on the 11th of december 2009 in Berlin. 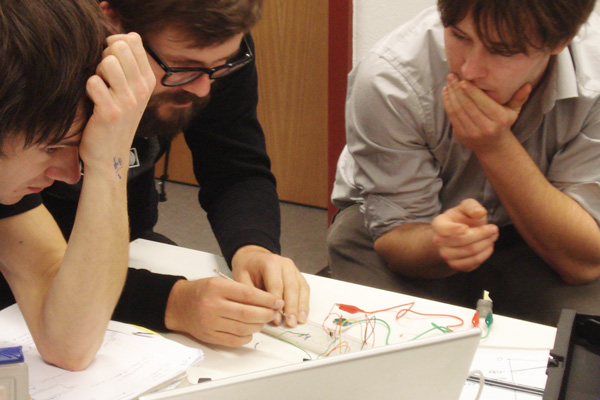 The focus was not only on creating new forms of interactions but also on understanding electronic components as acreative material. Though the term smart material is not describing it right, objects that have afunction that can be programmed are worthy tool kits for designers and deseign students 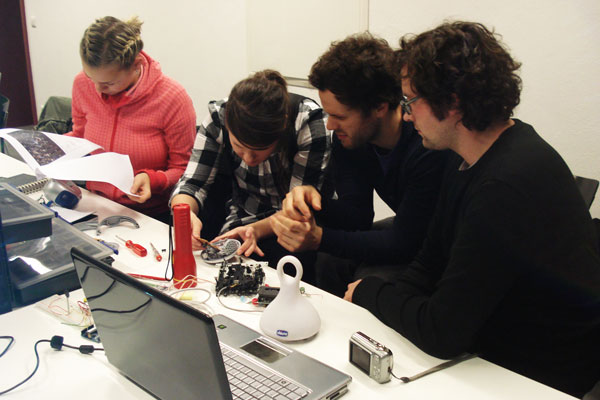 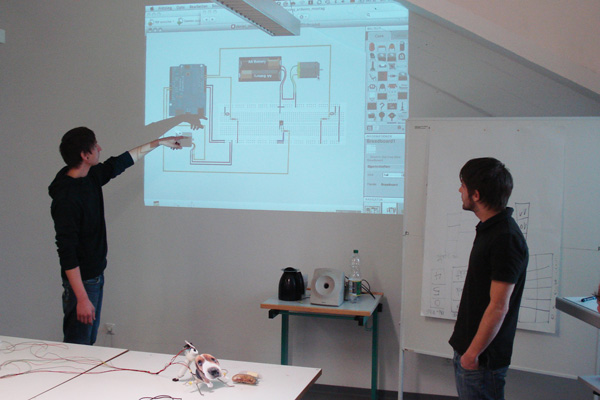