What an inspiring day. Together with curators and artists from all over europe we held a workshop during the transmediale´s “Free Culture Incubator”. We searched for possible new and allready existing reclaiming techniques for urban and public media screens. Some of the answers were all over impressing, such as the open lab initiative by Prado MediaLab and the urban interventions by FACT Liverpool. The second part of the workshop was about the link up between artistic positions and financial business models. The discussion was lively striding from cultural responsibilities of public media supplyers over the support of artists by those cooperations and the justifying role of artistic content next to commercials. On the table was Christian Vogel of the Wall AG and Andreas Orth of Berliner Fenster. Both companies have massive influence on our image and imagination of public space and know their role very well. It was quite hard to distinguish between their business model of selling public space to coorporate identities and the city marketing by communal officials. If you are interested, there is a mind map documentation of the workshop that we can send to you on request. 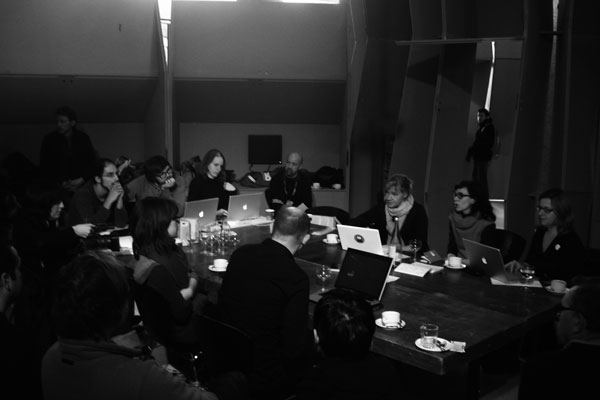