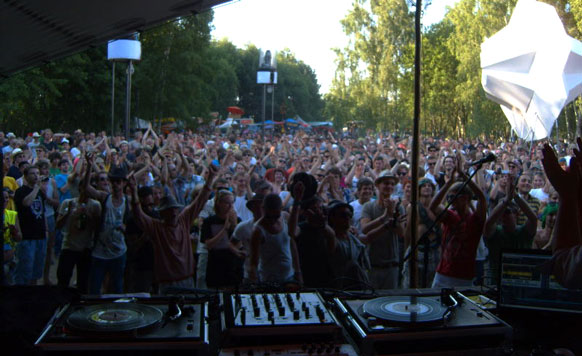 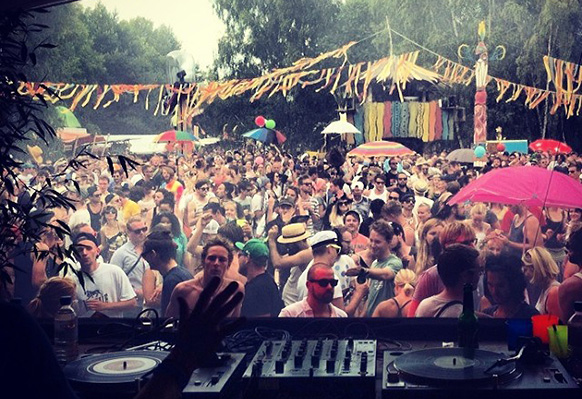 Here we go with a little round up to THE CONSTITUTE activities for and at the Fusion festival happening every year in the wild east of Germany. We love this festival, because of it´s DIY, autonomous and political attitude. And, not to forget, because of the stunning line up and the wonderful people there. Every year we are part of this festival with a colourful bunch of activists and actions to enrich the fest with our inputs. A constant link was the Projektor Orkestor, the little analogue visual project of us. We also regularly do DJ showcases at the famous SEEBÜHNE (pictures above), lectures at the CASINO HANGAR and DIY PUBplate Workshops at the WORKSHOP HANGAR. 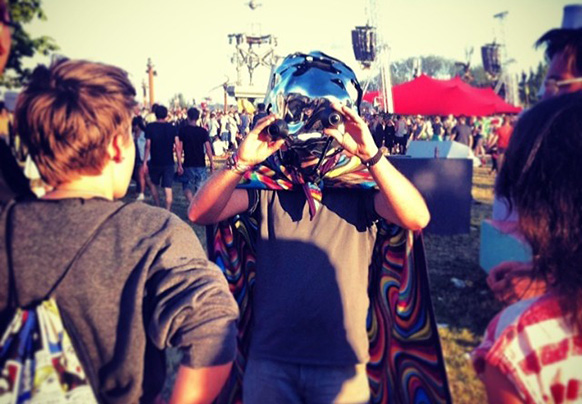 After having set up all projectors and stored them away for the Farbfest in Dessau we made a little sneak preview at the FUSION festival 2012. Within the DIY party curated by Pedro Pineda two of the orchestra went to eye-rock the festival with a mobile mini projektor orkestor: two overheads on one carriage, lots of found materials and the world as a canvas. After all a very good test for the premiere in september

Back from this rough week, first Grenoble, then Kiel, after that suicide commando towards spare time utopia fusionfestival I find some time to put up some impressions of the DIY VJ workshop. We had the luck to catch at least some hours of no rain to set up our van as a makeshift canvas and the overheads and slideshow projectors. A lot of people stopped by to try their luck in creating rotated and shifted interferences. Some also started to experiment heavily with the stuff we brought, such as waterbowls, oils, liquids and different foils, grids, and of course our two hour super mock up of a transparent turntable to rotate slides. In the end everything was a total mess, we had a very good time and are still very happy to had this chance of tryingout this idea!

We also experimented with the one of the basics in autnomous DIY practices in subcultures: cutting dub plates. Ok, we are not Ron Murphy or at Transition but we used our own limited skills to explore the possibilities of self cut “music”. For the workshop we prepared several pre-cut cardboard plates with an allready cut in spiral. By following the line with a nail, a boxcutter or similiar it was possible to create beats and pads. Very rough, midth based sounds but with some equalizer playing this can become music. Here is a little example